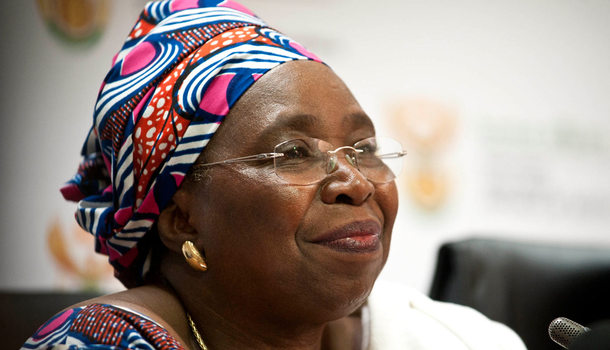 The characterization of Nkosazana Dlamini-Zuma on social media and even on the pages of some of our serious newspapers rings a sad and familiar bell.

That is, to every black woman who has known a career of being constantly mansplained and condescended; of having her judgment dismissed as ‘emotional’ or ‘getting personal’, of her ability questioned by the far less qualified, and of her dress sense and appearance being the subject of sniggers.

It is one thing to take aim at the Minister of Cooperative Governance and Traditional Affairs for her announcements (and the term is deliberate) conveying the decisions of the collective that makes regulations around the national state of disaster.

After all, this is a free country. That the regulations should be critiqued and challenged in court is the hallmark of a constitutional democracy.

Quite another is her portrayal as an unqualified doek-wearing diablo out to single-handedly destroy the civil liberties of the Republic with her red pen.

Taken even further, others reduce her to being somebody’s former wife, and therefore beholden to interests beyond the realm of her position.

These were the same ‘arguments’ advanced when Dlamini-Zuma was running for the Presidency of the governing party in 2017, when her marital status and even her motherhood were held up as somehow as a measure of her competence.

Arguably there has never been a man running for high office who has been accused of being not up to the task because of who he has fathered children with, or who he was once married to.

With the world having come a long way since the days when women required the permission of their husbands, fathers and brothers to open bank accounts, to vote, to travel and to otherwise conduct their own affairs – a woman should by now have earned the right to not have her abilities measured by the yardstick of whether she is somebody’s daughter, wife or ex-wife. Not in Dlamini-Zuma’s case, seemingly.

Were one to even overlook the latent sexism in reducing a woman to her marital status, only the wilfully myopic cannot see the misogyny and racism that has crept into the ad hominem attacks on Dlamini-Zuma, and that is has been worryingly normalized.

If social media (as some would have us believe) is a barometer of public sentiment, then we have strayed vastly from the founding values of non-racism and non-sexism in this Republic.

Posts depicting the Minister as an ape, or as a voodoo doll stuck full of pins are the thin end of the wedge in a toxic narrative.

Used in a different context, the label of ‘aunty’ and ‘gogo’ would be almost endearing.

In this one, they imply everything they are meant to – that the Minister should be somewhere knitting or nursing the grandchildren instead of on television.

As if this erasure of black women of a certain age isn’t enough, one has to contend with the standard insult leveraged against any woman in a disagreement – that she is a bitch.

“Get rid of this corrupt criminal bitch ASAP” writes one white woman in blue eyeshadow who in her other posts captions the word ‘savages’ next to a SAPS patrol vehicle.

Then there are the interesting image choices being made by photo editors to accompany stories of Dlamini-Zuma where she is either scowling or sitting with her arms folded to convey recalcitrance. A picture is indeed worth a thousand words.

Another favourite is the image used by the Change.org petition ‘Remove Nkosazana Dlamini-Zuma from Cabinet’ where what would ordinarily be a side glance is somehow given sinister connotations.

This same petition that has garnered over 300, 000 signatures, uses the familiar words in relation to black women leaders.

Whereas the men are attacked for dumb decisions and called ‘uninformed’, women are irrational, stubborn and petty, all terms used to reduce us to girlish emotions.

If and when black women do project political power or unapologetically exert influence it is flexing, or as one petitioner calls it:  ‘power-tripping.’

‘Just who does she think she is?’ asks another; and yet another says she is ‘too big for her boots’, words that have been used variously to describe women like Condoleezza Rice or Michelle Obama.

With Winnie Madikizela-Mandela no longer alive to give South Africans an Angry Black Woman to hate, it seems we have found a new one.

The thing with Angry Black Women is that it is expected that they confine their “angriness” to certain milieu as it were.

They are acceptable in certain contexts, like wearing afros and leather in blaxploitation movies or whipping off their knickers at GBV protest marches.

What they shouldn’t be is too visible in politics, or speak about important things like the economy. They should rather let the men speak for everybody.

This week’s headlines on two court judgments show that no amount of clarification by government has dissuaded those who want to drive a narrative that the Minister is a lone wolf making decisions independently from her colleagues.

It is telling that the slew of bad publicity that has followed Dlamini-Zuma of late has not been consistent.

In the early days of the lockdown nobody questioned her medical qualifications or common sense, but generally accepted that she was announcing regulations on behalf of the National Command Council (NCC) she sits on and not speaking for herself.

Then came the decision around the sale of tobacco during the nationwide lockdown and the doors were flung open for all manner of startlingly emboldened bigots and racists.

With it not being expedient or sexy enough to take issue with an entire Cabinet stocked with men and women of divergent ideologies and persuasions for an unpopular decision, a villain had to be found; namely ‘that woman.’

There is lots of reference to ‘that woman’ by the Change.org petitioners who seem not content with calling her an idiot, but a woman idiot at that.

One poster whose name says she is a woman herself expresses her ‘serious concerns about this woman’s qualification’, going on to call the Minister a’ geriatric’ who should be ‘put out to pasture because she is clearly past (sic) her sell-by date’: proving once again that misogyny isn’t the preserve of men alone.

That we seem to take perverse pleasure in seeing her caricatured as a useless gogo says much about the public psyche in relation to black women’s ‘place’.

Those who would join in the merriment would do well to consider Cesaire’s words, that “in the whole world, no poor devil is lynched, no wretch is tortured in whom I too am not degraded and murdered.”

The struggles of our mothers, sisters, aunts and grandmothers whose lot in life was relegated to being somebody’s ausi or to being the gogo of a white woman’s child were too bitter, and the price too high for us to now see both terms used to insult and belittle a black woman in democratic South Africa.

Politics is not for the fainthearted. Those who tread its fields must be accustomed to landmines. In saying as a politician she is fair game for any manner of insult is defending the indefensible.