What was the recipe of the election’s success? 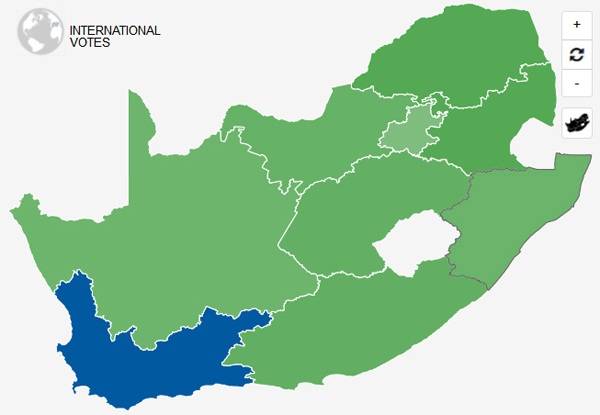 Life is a series of special moments. Last week’s election was one of those prolonged special moments strengthening our belief in the possibility of creating a country and citizenry at peace with itself.  It is through these moments that we garner the determination to persevere and reach our goal of a non-racial, non-sexist society where people work and live with dignity.

We have a long way to go to achieve this but nothing is impossible.
What was the recipe of last week’s success? What were the basic ingredients that propelled us to new heights?

Over 15 years, the IEC has developed into a formidable institution. It has drawn lessons from its mistakes in the past and has concentrated on perfecting the processes that ensured improved delivery.  As South Africans, it appears that as far as elections go, we have fully understood the importance of building an institution that can withstand the pressure of time and political vagaries. While we have drawn on best practice from around the world, we have crafted an institution that suits our own needs. Cursory research indicates that the IEC has largely been able to retain its staff and successfully bring in people with previous election experience during the busiest times.

Secondly, all major political parties have participated in crafting the electoral rules. The space has been created for parties to raise their objections or complaints and these by and large have been dealt with civilly. IEC officials do however complain that some leaders had a tendency to speak to them very rudely and with a great deal of arrogance. But in the main, the decisions of chief electoral officers in every province were respected because they conducted themselves according to agreed upon rules.

Thirdly, the two women at the helm of the organisation exuded a calm confidence. At no stage was the chairperson, Brigalia Bam or the Chief Electoral Officer, Pansy Tlakula seen to be fanning animosities or raising the temperatures amongst parties. Instead they were involved in endless behind the scenes discussions with party leaders to quietly convince them to compromise. Often these efforts went beyond the call of duty. Ms Bam was involved in discussions with leaders in KwaZulu-Natal when she could have said this was not her concern but the responsibility that belonged in entirety to the police. She would have been correct in law but she did what she had to do to help restore calm needed for the work to be done. The only blip on her record was her astonishing reluctance to say that the ANC had won the elections when she made the final result announcements.

By doing so, she left out one ingredient of a success recipe – graciousness in defeat.
Brigalia Bam could not get herself to say that the ANC won by a substantial margin, way ahead of the DA and COPE.  It was heartening to see COPE’s Lekota congratulate Zuma at the results centre but so far we have not heard Helen Zille congratulating him or the ANC for a performance that defied expectation. Considering all the negative dramas in the lead-up to the elections, it is indeed an extraordinary achievement. It is not only a matter of emotion and history. The ANC left nothing to chance. It persuaded many of its critics on a one to one basis and ran a campaign with first-world sophistication.

By the same token, we have not heard the ANC congratulate the DA in the Western Cape for its outstanding performance. Like it or not, the ANC will have a hard time to recover its support in this province at least over the next two terms.

It will also have to study closely the patterns in the various wards. Take for example, the voting stations in Lower Wynberg where I live. At the last election in 2004, the ANC led at all three stations: John Wycliff(ANC – 36, 18 percent, DA – 24.68, Methodist Church(ANC – 41,8 percent, DA – 28.3 and St Augustine where I voted (ANC – 37.2 percent and DA – 28.19).
Last week, the electorate shifted as follows at the same voting stations: John Wycliff(DA -69.43 percent and ANC – 6.07 percent), Methodist Church (DA – 68.17 percent and ANC – 10.57 percent) and St Augustine(DA 69.89 percent and ANC 6.3 percent). All indications before the elections were that this neighbourhood disapproved of the in-fighting in the Western Cape and the ANC’s presidential candidate.
Nobody would have predicted that the DA’s sweep in this area would have been so substantial. Instead of concentrating only on its present support base, the ANC will seriously have to understand what shifted voters so dramatically if it hopes ever to lead in the Western Cape again.

The DA will also have to acknowledge that COPE has pipped it to the post as official opposition in five of our nine provinces. This is no small achievement and secures the party a place in the ongoing political landscape.

In a funny sort of way, the election has made most South Africans feel they have won. This is the fourth ingredient in the recipe for our success. The electorate has expressed its will. Everybody was free to express themselves in terms of their own conscience giving us a result that provides a solid foundation that could reinvigorate parliament.

Will our politicians squander this moment or will they find in themselves the humility to acknowledge that once again we have been given a unique opportunity to appeal to the best in our nature. It is a time for curbing the impulse to be greedy and arrogant, to behave as if one community or set of individuals have a monopoly over best performance. Bam and Tlakula have shown that talent and ability comes from every corner of South African society and must be identified and allowed to blossom.

South Africa is made up of diverse communities and political interests.
Nationally, Black Africans represent 38 million people, White Africans, 4.3 million, Coloured Africans 4.2 million and Asian Africans 1.2 million.  Voting patterns in this election largely reinforce these racial divides with the ANC predominantly appealing to Black Africans and the DA to White Africans.  COPE appears to have drawn a cross-section of support but is way too small at this point to confirm that we are moving firmly beyond our racial enclaves. The challenge remains to find ways to reinforce our South Africanness. We can no longer say that we do not know the ingredients for success. It was in our face last week.

Perhaps the political parties can place a moratorium on squabbling for the next year before they get geared up again for public spats in anticipation of the local government elections. They could negotiate a truce through parliament for one year and call on everyone to work together in their areas to improve local conditions irrespective of which party they belong to.  Parliament could assess after one year whether this has made any difference to the motivation of both citizens and public servants. We may just be pleasantly surprised.

Apart from his unfortunate recent history, Jacob Zuma is well-placed to create an enabling environment. Through the decades, this has been his abiding strength. He is known as someone who listens and brings people together. His performance during the election campaign attests to this strength. Most of all he has the capacity to bring to the centre the voice of the rural poor.
If we are to survive the present global financial crisis and tackle the huge challenges, we cannot afford to be pitted against one another. We must create a foundation for dialogue through which we can find the best ways to solve our huge inequalities. No one leader can achieve this but what he or she can do is to set the right tone so that our efforts will generate special moments that will tip our country towards greater fairness for all its citizens.