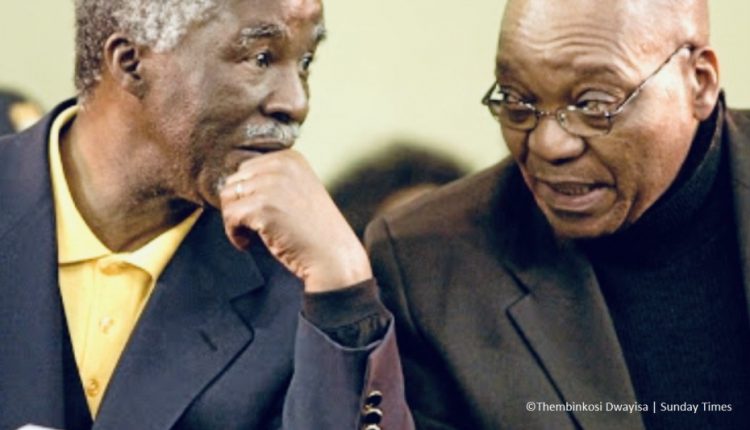 The last temptation is

to do the right deed for

– TS Elliot, Murder in the Cathedral

The rifts run deep.  Half of Thabo Mbeki’s Cabinet have chosen to follow him out of  the door leaving the country in a state of uncertainty.  When Parliament sits tomorrow, the resignations of 10 Cabinet Ministers and three deputy ministers will hang like a dark cloud over the installation of a new president.

Jacob Zuma and the deputy president of the ANC, Kgalema Motlanthe, expected to fill Mbeki’s shoes, will have to demonstrate strong leadership in the next few days to bring calm to the nation.  This is a crisis that can be managed but it could also exacerbate the tensions within the ruling party which last weekend’s national executive committee sought to reduce.

While some of the resignations were expected, that of Finance Minister, Trevor Manuel, came as a bolt from the blue.

Over the past week, there have been consistent indications that he would remain in his post.  He has clearly taken a stand on a matter of principle, risking the reactions of the markets to show his personal dissatisfaction with the way Mbeki was removed.

At the same time, he put the new leadership on the back foot.  They have had to approach him cognisant of the fact that they will not easily be able to change the country’s economic direction.

While Zuma’s allies may not like Manuel, they will not be able to ignore the fact that the markets only stabilised when his spokesperson said he was still available for reappointment.  No amount of shouting or protesting from them will alter this reality.

Some ministers are resigning because they feel they need to make space for the new president to have the freedom to create his own Cabinet.

Others are profoundly disturbed by the way in which Mbeki was treated and have had enough of the internal wranglings within the ANC.  Essop Pahad, Minister in the Office  of the President, has not only resigned from Cabinet but also as a member of Parliament.

When Mbeki fired Zuma three years ago on June 14, 2005, he could not have imagined that he had set in motion a chain of events that would bring about his own demise and that of many in his Cabinet.

At the time, his stand sent a strong signal that the South African government would act against corruption without fear or favour.  This was well received on the continent and abroad.

He was prompted to act after Durban High Court Judge Hilary Squires had found Zuma’s financial adviser, Schabir Shaik, guilty on all charges on June 2, 2005.

He sentenced Shaik to 15 years in prison for fraud and corruption and further found that the two men had had a “generally corrupt” relationship.

At a special joint sitting of the two Houses of Parliament, there was no cheering or jeering when Mbeki announced that he was firing Zuma.  The silence suggested he had struck a discord brewing deep down within the organisation.

In retrospect, this marked the beginning of a revolt within the ANC that culminated in his ousting at the Polokwane conference in December last year.  Mbeki was roundly defeated, losing his position of head of the ANC to Zuma.

Despite this defeat, fresh charges were brought against Zuma soon after the conference, propelling the ANC into a circus of conflicting forces for most of this year.

Zuma supporters not only waged a relentless campaign against the judiciary but also took the unprecedented step of saying that they were prepared to “kill for Zuma”.  This has threatened to drag the country back into its pre-1994 mode.

Earlier Zuma’s conduct during a rape trial also set back the gains of the country’s women’s movements.  He was found not guilty but succeedded in doing enormous damage by elevating chauvinistic male prowess to new heights.  He gurther set back the country’s education campaign around safe sex when he admitted to having unprotected sex and taking a shower afterwards as a precaution.

Then came a second judgement that changed the political scene.

In his ruling on September 12, 2008, Judge Chris Nicholson agreed with Zuma that the decision by the Nationa Prosecuting Authority (NPA) to bring corruption and other charges against him in December, shortly after the Polokwane conference, was invalid and unconstitutional because the NPA had not given him a chance to make representations.

He emphasised that this was not a finding on Zuma’s guilt or innocence and the NPA could press charges afresh.  He drove a nail in Mbeki’s coffin when he said claims of a political conspiracy were perhaps not as farfetched as some believed.

Suddenly the judiciary was hailed as fair and independent.  Nicholson was described as “progressive” and not “anti-revolutionary”.  Zuma and his supporters felt vindicated.  Then Mbeki and his Cabinet decided to appeal against a section of the judgement and all hell broke loose.

By the time the national executive committee (NEC) met a week later on Friday morning, Zuma’s view not to remove Mbeki but to call for an early election did not hold sway.  He had to settle for a consensus position.  By Saturday afternoon, the NEC had decided it would recall Mbeki and on Sunday night he announced his resignation through a live television broadcast.

The ANC’s handling of the weekend’s developments showed a level of sophistication  comparable to its conduct during the negotiation period and immediately thereafter.  There was none of the shrillness of weeks gone by.  Mbeki, in his televised address to the nation, conducted himself with great dignity, quietly retiring into history.

So it seemed until Tuesday when the resignations were announced.

At the same time, Mbeki has gone to the Constitutional Court to challenge aspects of the Nicholson judgment.

Ironically, Mbeki may be the winner in this round.  By exiting with grace and not digging in his heels as he did before Polokwane, he has earned a considerable respect at home and abroad.  This has released him from the strain of being the punching bag for every difficulty experienced by his Cabinet.

The focus is now no longer on him.  It is firmly on the new leadership and more specifically on Zuma and Motlanthe.  Their day has come and all that follows will fall squarely on their shoulders.  They need to move quickly to firm up Trevor Manuel’s appointment as finance minister and accelerate whatever plans they may have for a new Cabinet.

Ideally they would have wanted to attend to this detail after the elections in six months’  time.  The resignations however remove this luxury.  They will have their work cut out over the next few days.

There remains considerable scepticism that the firing of Mbeki had anything to do with bringing unity in the ANC.  Instead there is a strong feeling that the events witnessed   spoke more of revenge than healing.  It was more about effectively ending all prosecution aginst Jacob Zuma than anything else.

If it were about unity and healing as the secretary-general, Gewde Mantashe said, the NEC would have had to act against both men.  Instead those who wanted the charges to go away, won the day.

The country may yet count the costs of one man doing the right thing for the wrong reason and another allowing others to do the same.

Can the ANC rescue its tarnished image?