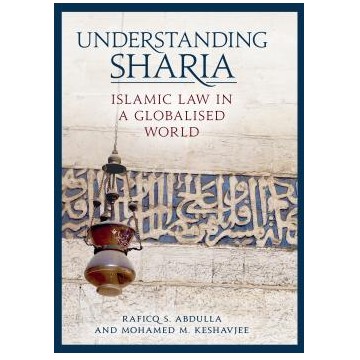 Islamic Law in a Globalised World

Post 9/11, Sharia or Islamic law has peppered global discourses like never before in modern times. Negative statements about Sharia have hogged newspaper headlines leaving the public with little room but to conclude that it was a system of law that was unjust and backward.

Last year in 2018, two Muslim lawyers took the bull by the horns and published a 321-page book outlining the evolution of Sharia from the time of revelation of the Quran to the present day. The book, Understanding Sharia, Islamic Law in a Globalised World has been written for both Muslim and Non-Muslim readers.

On the back cover, theologian and interfaith specialist, the Revd Canon Dr Alan Race describes it as follows: “Accessible, informative and wonderfully enlightening, this book is a must-read for anyone who wants to acquire an unprejudiced perspective on the meaning of sharia for today.”

I have to agree with him.  The book drew me in like I never expected. It allowed me to learn about the ethical underpinnings of sharia flowing from the Quran and the myriad of twists and turns the laws took in different countries over the past 1400 years since the birth of Islam. It also helped me understand the interplay between local customary law and Sharia and how adjustments were made to accommodate the good functioning of different societies. According to the authors, with these modes of accommodation between political authority and the religious establishment on the one hand and the religious establishment and customary practice in newly conquered areas on the other hand, sharia met the needs of Muslim communities as they developed over the course of history.

One of the central challenges throughout the ages has been developing rules that guide the individual’s pursuit of his or her faith while at the same time establishing a righteous society that would allow the individual to develop and expand. Islam lays great stress on social duties which serve to test and train individual character.

The two authors are well placed to have done this research. Interestingly both are South African-born but based in the United Kingdom.

Raficq Abdulla was born in Durban and his father was a businessman Shaik Abdulla of Hyderabadi background. His mother was of Malay background from the Cape.  Her name was Moseda Ismail.  She became a doctor, qualifying at Edinburgh University, in the 1930s.  His mother’s two grandparents were important imams in the Cape, one of whom represented Sultan Abdul Hamid II.

He was sent to the UK in the early 1950s to attend a prep and public school.
He studied Jurisprudence in Brasenose College, Oxford and qualified as a Barrister at Law at Middle Temple Inn. For over 25 years, he has been on the panel of advisors of the Muslim Law Sharia Council of the U.K.
He has written two books interpreting the poems of Rumi and Attar respectively and is a poet in his own right.  His years of work on interfaith relations amongst Muslims, Jews and Christians earned him an MBE in 1999.

Mohamed M Keshavjee was born in Pretoria of Indian parents and was educated at Pretoria Indian High School. He left South Africa for Kenya in 1962 where he completed his high school education. He went to the UK in 1967 and qualified as a Barrister at Law at Gray’s Inn and then returned to Kenya to practice Law.

In 1973 he migrated to Canada and completed an LLB at Queens University and then practiced at the Ontario Bar. Life was to bring him back to the UK in 1998 where he specialized in Islamic Law at the School of Oriental and African Studies in London. Eventually in 2016 he was the recipient of the Gandhi King Ikeda Peace Award for his work on Peace and Human Rights education. He is also a member of the Darwin International Institute for the study of Compassion.

In this book, the authors do not only outline the history, identifying the different schools of thought and great legal minds that shaped sharia, but also turn to contemporary challenges in the Muslim world. Sharia is examined with regard to issues such as human rights and criminal penalties, including those dealing with blasphemy, adultery, commercial transactions, bio-medical ethics and other matters.

While the authors say that sharia does not necessarily represent the core of Islamic identity – which is very diverse – today’s Muslims have to study the timeless ethical principles at its base in order to contribute to solving problems confronting the world. They call on everybody to be reflective saying that extremism is “a toxic form of nostalgia for definite responses as opposed to the discomfort of asking awkward questions for which there may not be certain answers.” The authors conclude that Islam as a faith and culture has a much greater and generous vision that “attempts to realize the mercy and compassion of the divine” rather than create “enmity and reprisals in the name of good.”

This book is a must read for serious political analysts across the world. It will help them understand an important worldview that no longer remains hidden in the sands of the desert.

This review first appeared in the Mail and Guardian, June 2019.