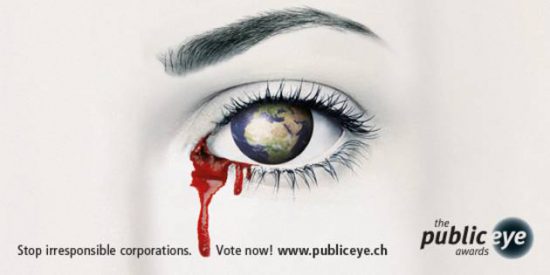 In the year 2000, the “Public Eye on Davos” was created as a counter-summit to the World Economic Forum (WEF), and over the years it grew into an internationally recognised online campaign, as it named and shamed unscrupulous companies with its awards. The “Public Eye Awards”, which were handed out from 2005 to 2015, placed the spotlight on the companies with the very worst human rights and environmental records. The campaign finally came to a close in 2015, with the presentation of the award for the the ultimate shame-on-you category, the “Public Eye Lifetime Award”.

From 2001 to 2004, the Berne Declaration (which recently changed its name to Public Eye) organised a counter-summit to run alongside the World Economic Forum (WEF), called “Public Eye on Davos”. This open forum acted as a platform, broadcasting criticisms from representatives of both the global South and North with reference to the form of blinkered economic globalisation being implemented. The debates also focused on finding alternative international economic systems that would allow greater sustainability and improved social and environmental justice.

From 2005 onwards, the campaign shifted focus to find a better way of opposing the WEF and its participants. Specifically, this involved the presentation of the “Public Eye Awards”,  shame-on-you prizes that gave those companies with the very worst human rights and environmental records at least a little of the medicine they deserved in front of a huge media audience. Violations of human rights, poor working conditions, environmental damage, lack of transparency and corruption: the Public Eye Awards laid the practices of irresponsible companies bare, exposing them to pressure from civil society. Placing the “prizewinner” in a spotlight in front of public opinion and the gathered media helped to apply greater pressure on them to take responsibility for their actions. From 2009 onwards, the Berne Declaration presented the Public Eye Awards in partnership with Greenpeace Switzerland allowing the message to reach a larger audience.

In 2015, the campaign was ended in style, with the presentation of the “Public Eye Lifetime Award”. The event featured The Yes Men, American superstars of the alter-globalisation movement, presenting their incisive “Requiem for the World Economic Forum”, as they symbolically laid the Davos Economic Forum to rest, together with its own specific brand of neo-liberal globalisation that was so glorified in days gone by.

The aim of the Public Eye Awards was to foster greater social and environmental justice. The awards have clearly demonstrated the need to establish effective legally binding measures to increase corporate accountability. In April 2015, a public initiative was launched aiming to get this need taken seriously in the political arena: the Responsible Business Initiative demands legally binding constraints for companies based in Switzerland to ensure that they respect human and environmental rights around the world.

For more detailed information, check out our German or French website – or visit http://www.publiceyeawards.ch!

SABC3 Expresso – Zubeida Jaffer on the Launch of Number10Publishers

On the couch with Zubeida Jaffer | CapeTalk