We have not done enough to break the bonds of patriarchy that diminish us as women. 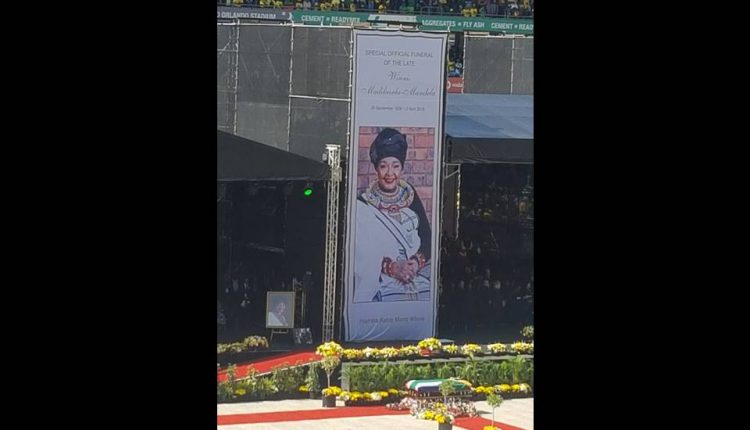 What can we as a nation do to heal your wounds? What words can we find to ease your pain?

I am a journalist, a writer, a storyteller searching to find a way to process the inordinate pain you have endured in your life. Seated on the media benches at the Orlando Stadium, I watched as your mom’s casket slid elegantly along the red carpet that ran from the players’ entrance to the foot of the stage. It rested in a protective garden of green hedges and black pots filled with yellow flowers at the base of the huge enclosed platform. Towering up behind the casket was a large banner showing her dressed in white and black traditional dress, circles of multi-coloured beads around her neck and wrists, with a black headscarf (doek) accentuating her beautiful face.

The coffin appeared like a signature beneath the dramatic photograph, affirming that it was indeed Nomzamo Winnie Madikizela-Mandela whom we had come to bury. Through the service, my eyes were pulled back to this spot continuously as I listened to the outpouring of grief from speakers and the vibrant crowd of mourners that filled the stadium to capacity.

The moment of greatest intensity was when the two of you rose to pay tribute to your mother. Hearing the sound of your voices and feeling the strength in them made me connect to both your mom and dad. It was as if I was hearing them burst through your throats comforting us with their presence.

It was as if the two of them were assuring us that they had left you behind so that we can be reminded of their resolute courage.

The outrageous travesty of justice that they and you have endured on behalf of and with our nation is almost beyond description. Those memories will always pierce your hearts and ours. Your father had the years of freedom to somewhat ameliorate the hardship but your mom, as speaker after speaker confirmed, was robbed of her legacy during her life.

You were on point when you said that South Africa and the world hold men and women to different standards of morality. In describing the way in which your mother had been treated, you firmly placed the spotlight on patriarchal attitudes that continue to throttle our democracy. In her death, she is forcing us to recognise that we have not done enough to break the chains of patriarchy that diminish us as women.

And as you said, so many young women have heeded this historical moment and have stood up dressed in black with their headscarves and declared “I am Winnie.”

Those who have been so cruel to create divisions within the resistance movement so that their version of your mom’s life could become the dominant story should be named and shamed. I am not referring here to the leaders of the resistance who were subjected to this misinformation or the journalists who were drawn into the propagation of it. I am referring here to the names of those who served on the Stratcom at the time and who reported to PW Botha and FW de Klerk (not to mention the other heads of state before them).

You so correctly pointed out that your mom was the one who campaigned consistently for your dad’s release long before it became fashionable to do so.

In late 1985, your mom contacted Cape UDF activists asking them to put in place a plan for the day your father would be released.

She met with the UDF’s Cheryl Carolus telling her that the Commonwealth was sending an Eminent Person’s Group (EPG) to the country in January 1986 and they would meet with your father. He would either be released before or after that and that Western Cape activists had to be ready to welcome him. Cheryl contacted the UDF’s Johnny Issel who suggested that thousands of flags be made and stored in every town and village. The logic was that even if the apartheid state banned gatherings or restricted Mandela in any way, it would be difficult for the state to prevent thousands of people from hoisting flags wherever they lived.

I was asked to identify clothing workers who could stitch the flags at an Athlone factory. The owner, Fuad Carlie, allowed us to use his facilities at night when his staff had gone home. It’s a long story but to cut it short, the security police and army surrounded the factory on the third night, arrested the women workers and confiscated rolls of specially dyed black, green and gold material. A few days later Johnny and I were both arrested. The security police were never able to establish why the women were sewing those thousands of flags. Charges were brought against the women and the factory owner but the case failed to convict.

At the same time, PW Botha and his cabinet (which included F W de Klerk) decided against releasing your father, choosing instead to smash the internal movement and weaken the resistance. The destruction of your mom was part of this plan. I can only imagine how distraught she must have been to again be denied a reunion with her husband and possible change in the country.

If the apartheid state had not taken that turn, perhaps the damage would not have been so incalculable. It was in those few years that the greatest havoc unfolded. Thirty thousand activists and others were detained around the country. We now know that Stratcom unleashed a campaign against your mother to draw a wedge between herself and other leaders. They needed to release your father into a divided and weakened organisation so that they could control future change.

It was your mother who was the greatest loser of these cowardly manipulations.

Is this not what so many of us are: the product of a fierce struggle against a violent system that seeped through our skins slowly poisoning our beings. Should the question not be: how do we release this poison and lift ourselves to a transcendent space where our wounds can heal?

Other than praying for you and sending you this letter, I don’t really know how I can ease your pain. I am hoping though that my words will embrace you and hold you tenderly so that your wounds can heal. When I listened to you and watched your expressions and heard the sounds of your voices, I selfishly wished that you would play a public role that could assure us that our leadership quotient remained strong and decisive in creating a fair and kinder South Africa.

I stopped myself. How could I expect more from you? At the funeral, your brutal honesty lay bare your deep, raw wounds for all to see. Perhaps it is time to trust the young women who so courageously declared they were Winnie. They now have to take up the challenge of leading us further along the road towards achieving a fair and kinder South Africa. This will give you the time to heal so that you could eventually support them from a place of serenity.

*This Open Letter was originally published by The Journalist.

Hold your head up high and make the right choice

Review: Beauty of the Heart